Rainwater tanks are a relatively static item once plumbed on site, this does not mean that they should be regarded as maintenance free.
Each of our standard grade Duraplas polyethylene (plastic), water tank comes supplied with a mosquito grade stainless steel mesh inlet strainer basket, a PVC water tank overflow flange and a “Watermark” approved brass outlet and Chrome Ball Valve.

The above fittings are included in the price of each tank sold so that the tank is ready to be plumbed on site by either yourself or your installer after delivery. Tank strainer covers are available as an additional cost option, however there are pros and cons to utilizing them. Obviously, a strainer cover will prevent leaf litter and other debris from blowing into the tank strainer or falling into the strainer which is a good thing. They will also assist in mitigating the amount of sunlight from entering the tank which will assist in preventing algae growth.
However conversely, a tank strainer cover can also hinder a quick inspection of the tank strainer to ascertain how much leaf litter and other debris may have washed down to the tank strainer from the down pipe connected to the tank from the roof harvest area. Generally speaking, if an object is “out of sight”, then it’s also normally “out of mind” and this can lead to neglecting a regular and ongoing water tank maintenance regimen.

If you refer to the photo below, this shows a water tank that does not have a strainer cover installed. This means that the tank strainer can be viewed regularly and any accumulated leaf litter or other debris, can be quickly removed from the strainer basket allowing the tank to receive maximum water from the down pipe feeding into it. 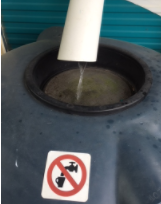 Conversely, if you now refer to the next photo below, this shows a water tank that has had a strainer cover installed, (removed for illustration purposes). Remember as previously mentioned the old saying “out of mid, out of sight”? Due to the fact that this particular tank below normally does incorporate the use of a tank strainer cover, the actual tank strainer cannot be regularly viewed and therefore succumbs to neglect. 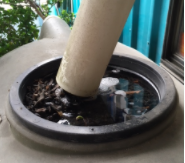 The photo above illustrates the actual build up of leaf litter that was found under the strainer cover and was actually preventing free flow of water into the tank, due to the fact that the tank strainer itself had become blocked from all the trash. This was only noticed when the water tank owner passed by the tank and wondered why the water was spilling out below the strainer cover and not via the tank overflow. The build up was such that the rainwater normally collected from the roof harvest area feeding the tank via the downpipe was actually being prevented from flowing into the tank and the owner was losing this water as a result. Not a particularly pleasing outcome when one is totally reliant on rainwater for their needs. This illustrates a great example of why a regular water tank maintenance program is vital. Obviously if the strainer basket on your own particular water tank is higher than eye level, then you’ll need to employ a ladder to be able to access the strainer basket to inspect and carry out any necessary maintenance.

Terms | Returns | Privacy
COVID-19: At present we are operating on a 'business as usual' basis, however our manufacturing and delivery process may be subject to interruption and delay, pending further government announcements. We will keep our customers updated with any announcements that are likely to have an impact on manufacturing/delivery lead times.